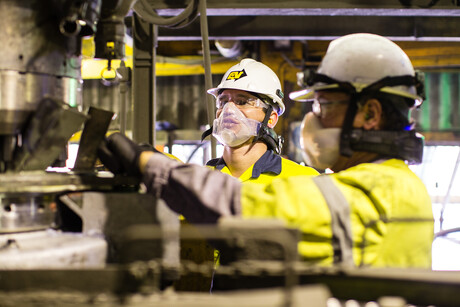 Crystalline silica is a natural mineral found in construction materials such as concrete, bricks, tiles, mortar and engineered stone. Silica particles are much smaller than a grain of sand and are harmful to inhale into the lungs. This makes respiratory protection, powered respirators especially, vital.

Workers are regularly exposed to a range of workplace hazards that have the potential to impact their quality of life and in some cases life itself. The resulting injuries for many workplace hazards are either immediate or quickly recognised; however, injuries such as those to the respiratory system often take many years to make their presence felt. Ensuring that respiratory risks are well managed in terms of engineering controls and the provision of appropriate respiratory protective devices is critical.

Respirable crystalline silica (RCS) is a recognised workplace hazard that presents serious respiratory health for workers, often resulting in a condition known as silicosis. A recent report has suggested that over 400 Australians are living with silicosis. Annually, around 600,000 Australian workers are at risk of inhaling silica dust at their workplace. Many common industrial activities regularly expose workers to RCS. Worksites such as manufacturing, construction and mining are working with materials and processes that produce fine dust which potentially contains RCS and other airborne hazards.

Respirable crystalline silica particles can be so small that they are not visible but can penetrate deep into the gas exchange region of the lungs and can cause silicosis. Silicosis results in permanent lung damage — it is a progressive disease that is debilitating and can lead to serious illness or death. Unfortunately, by the time the disease is diagnosed the damage is irreversible. The amount of crystalline silica in products can vary. Examples include brick (up to 30%), tile (30–45%), granite (20–45%), concrete/mortar (25–70%), sandstone (70–90%) and engineered stone (90%+).

From 27 October 2020, the mandatory workplace exposure standard (WES) has been halved from an eight-hour time-weighted average (TWA) airborne concentration of 0.1 milligrams per cubic metre (mg/m3) to 0.05 mg/m3. And as of 27 October 2021, the WES for respirable coal dust is expected to be halved to 1.5 mg/m3. WorkSafe Victoria has gone above the national standards and recommends that employees are not exposed to levels above 0.02 mg/m3as a TWA.

根据SafeWork新南威尔士,硅是其中一个p four health hazards affecting workers in the building and construction industry. The hierarchy of controls for managing risks such as silica exposure recommends elimination or substituting the risk, isolating the hazard, engineer controls and providing suitable personal protection equipment (PPE). Although PPE is the last step in the hierarchy of controls, it often plays an important role in protecting workers. Powered air-purifying respirators (PAPRs) provide an increased level of protection and are being increasingly recommended for use against hazards such as silica.

PAPRs utilise a motor and fan system to provide filtered air to the breathing zone while maintaining positive pressure. They are not dependent on the facial seal of the respirator to maintain protection. This results in a significantly increased level of protection for the wearer in comparison to a negative pressure respirator such as a disposable mask. All respirators have an assigned protection factor (APF) in line with guidance from ASNZS1715:2009. The APF for PAPR respirators ranges from 25 to 1000. There is a variety of PAPR models available, from lightweight neck-mounted products that offer improved mobility and comfort to belt-mounted models that connect to helmets or head tops via a hose.

Fit for work: why gender-biased workwear is unsafe

Personal protective equipment, in the form of clothing or footwear, should be made to fit both...

Follow these fitting instructions on how to get an effective seal on a trifold respirator.

Silica dust is estimated to cause over 230 cases of lung cancer each year in Australian workers.

The next decade of electric cars: a guide