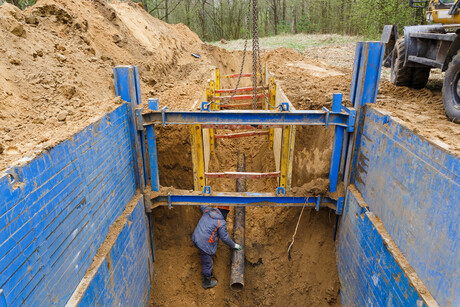 Land development company Wormall Civil Pty Ltd has been fined $95,000 and ordered to pay $2044.50 in costs, after a 2018 incident in which a worker was seriously injured when a wall and a steel plate fell on him. The company pleaded guilty to failing to provide and maintain a safe workplace and, by that failure, causing serious injury to an employee.

In August 2018, employees of Wormall Civil were engaged in civil works for proposed housing blocks at a site in Baldivis, including creating roads and blocks of land and installing services such as sewerage, power and water and installing limestone retaining walls between blocks. On the day of the incident, workers were extending sewer inspection shafts in an open shaft around 1.8 metres deep beside a partially constructed limestone retaining wall where a steel plate had been used to shore up the side of the trench close to the retaining wall. Two of the workers left the trench, after which the steel plate and limestone retaining wall blocks collapsed into the trench; the remaining worker was pinned by the steel plate and several limestone blocks, which weighed approximately 250 kg each. An excavator that had been working close to the trench was used to remove the materials from the worker and his colleagues lifted him out of the trench.

该工人对他的骨盆区域遭受了严重的压伤伤害，包括需要使用钢板和螺钉稳定骨盆的多个断裂。该工人还接受了理疗和其他医疗支持。WARKSAFE WACommissioner Darren Cavanagh noted that although the company had internal policies and procedures to ensure work was performed in a safe manner, none of them were followed. Kavanagh added that Wormall Civil’s management plan for this site stated that the Western Australian Code of Practice for Excavation would be followed when earthworks were being undertaken, but this did not occur.

“A site drawing specified that no excavation work was to be carried out in front of retaining walls without approval from a structural engineer, and the project manager also warned that it would not be safe to undertake work in the trench without first removing the wall. But this was all discarded and the code of practice and internal procedures ignored when the decision was made to use a steel plate as ad hoc shoring for the retaining wall, not a recognised safe method of shoring as per the code,” said Kavanagh.

Kavanagh added that it would have taken approximately two hours to dismantle the retaining wall, but the management’s disregard for the safety of the workers resulted in devastating and long-term injuries to a young worker. “The case should provide a strong reminder to industry that safe work policies and procedures must be in place and, most importantly, should always be followed,” said Kavanagh.

A truck body manufacturer has been charged after a workplace incident in which a worker was...